While on a lunchtime walk through St Martin's campus I heard horns blasting. I followed the stream to a parking lot filled with motorhomes. Between a Winnebago and a sat a group jazz musicians blasting away on a trumpet, a trombone, a french horn, and a banjo at least. 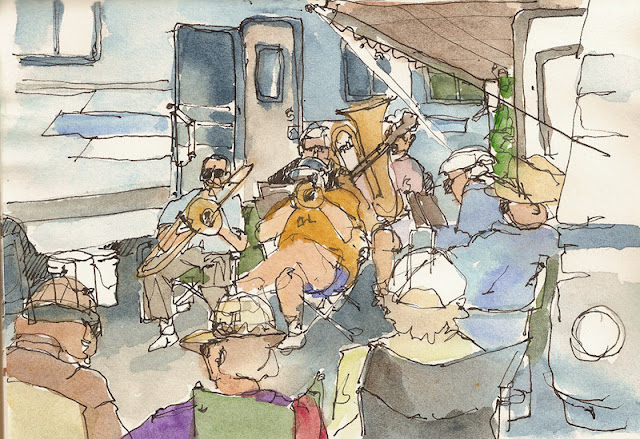 Dean Martin greeted me as I ambled up to the group. He called the group the Trailer Trash Jazz Band - a pre-function to the annual Dixieland Jazz Festival which opens Thursday. The audience knitted as the musicians, drawing from North Carolina, California, Calgary and Seattle put out some serious jazz. With this as a sample I can predict a great Dixieland Jazz Festival.
Posted by Jane Dillon Wingfield: janewingfield@gmail.com at 9:26 PM No comments:

Once the city post office, a motor stage depot and then offices the the Morning Olympian, the Reed block sits nestled on the corner of Washington and Legion. Some of the architectural details were destroyed in an earthquake in 1949 but Victorian pilasters and arched windows on the second floor remain intact. 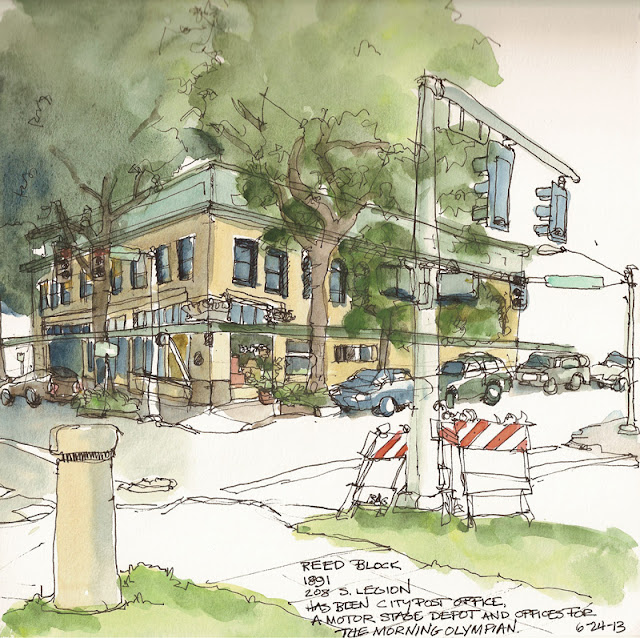 .
Posted by Jane Dillon Wingfield: janewingfield@gmail.com at 10:31 PM No comments:

Color is what initially attracts me to a scene. This grouping of buildings on Fifth avenue in downtown Olympia, between Columbia and Capital fit's that rule perfectly. Each building painted in a different bright color they can't fail to catch your eye, let alone your appetite. 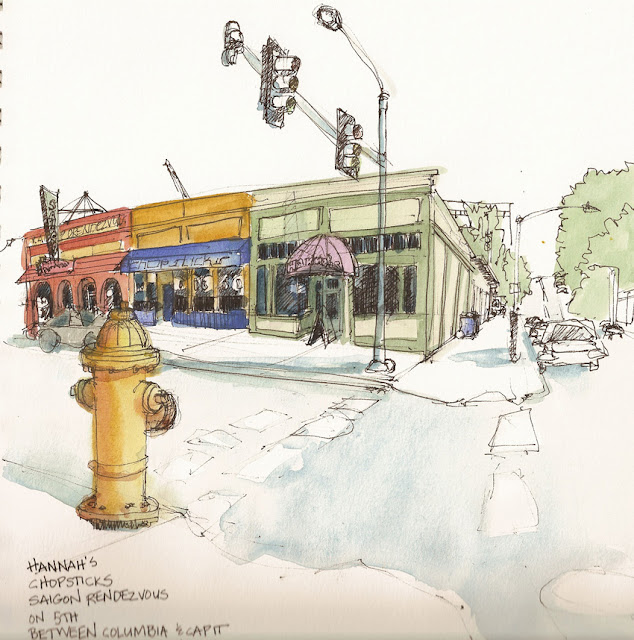 The red building on the left holds a special place in my heart. For the past couple of decades it has housed a Vietnamese restaurant called the Saigon Rendezvous. Well before that, however it was home to the New Canton Cafe where I was employed for a short time while going to college. It has a soda fountain style bar and several booths was owned by a Chinese-American woman and graduate of the University of Washington and her husband from Canton (now Guangzhou). On Saturday evenings she would roam the restaurant playing her accordion while I munched on fortune cookies that predicted my fate. Interestingly enough not long after working there I moved to Asia, albeit a bit to the east in Tokyo.  Must have been the influence of the accordion.
Posted by Jane Dillon Wingfield: janewingfield@gmail.com at 11:41 PM No comments: 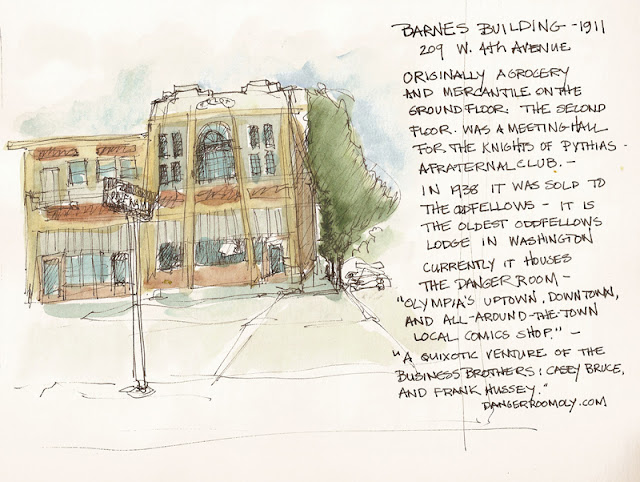 Posted by Jane Dillon Wingfield: janewingfield@gmail.com at 10:29 PM No comments:

The Olympia Downtown Historic District Walking Tour describes the Rowland -Leland building, built by Joseph Wohleb as Art Moderne style. It's rounded marquis and entrance columns make it a dead giveaway of the  30's and 40s. It was once the home of Olympia Oil and Wood products; today it houses several businesses including Mix 96 and Einmaleins, an interactive design studio. 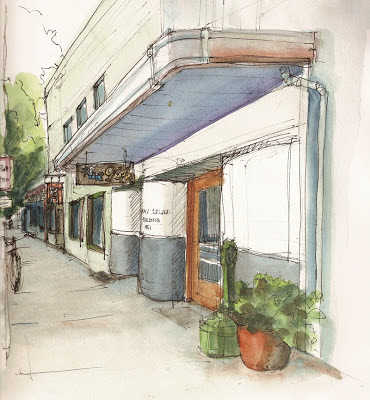 According to Tom Anderson who owns Thomas Anderson Studios next door, the Rowland Leland was considered the most modern building in town in 1941. Sirens that announced the attack on Pearl Harbor sounded from the roof.

This view at the right highlights the curved marquis and entrance-way columns representative of the Art Moderne style.

The second view below was done the day before but it didn't really catch the most distinctive aspects of the building. 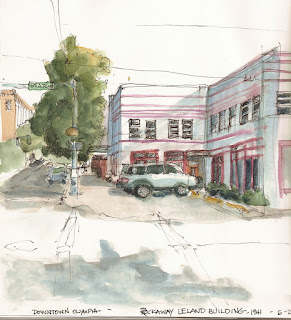 Posted by Jane Dillon Wingfield: janewingfield@gmail.com at 10:52 PM No comments:

Perched 175 ft high above Budd Bay on a gantry crane sits a nesting box for a peregrine falcon and her  four fledglings. This years flock marks the 11th year the perigrine couple has chosen the Star crane as their birthing room. When the first nest appeared in 2004 the eggs were jostled and failed to hatch. The Department of Fish and Wildlife installed a nexting box in 2005 and since then the number of fledglings has produced several survivors.

Dingey's Seafood at the Olympia farmer's market has set up a viewing station just behind their vendor stall, bordering the market parking lot. A telescope pointed directly at the nesting box sits beneath their red and white umbrella shielding birdwatchers from sun and rain. 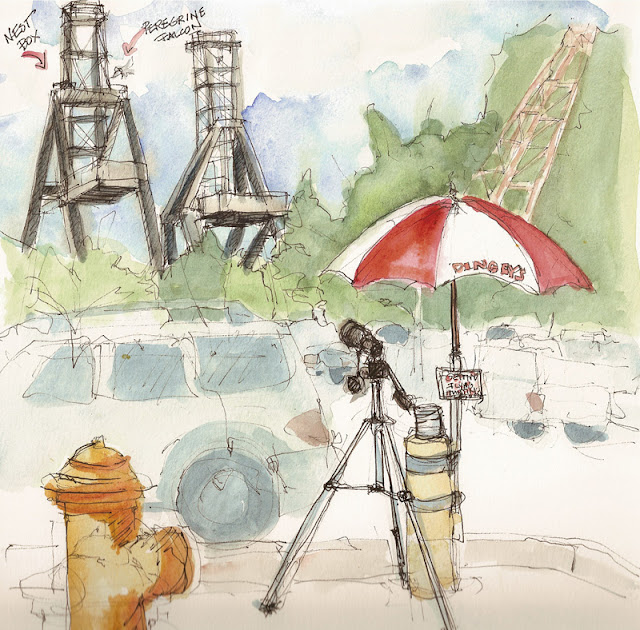 Every year the birds are banded for tracking purposes. The Department of Fish and Wildlife monitors several pairs throughout the state. Several have taken up residence in urban areas on bridges and high-rise ledges.

Peregrines were endangered a number of years ago due to pesticide poisoning. They have since graduated from threats of extinction and their population has increased for the past few years. Peregrines are the world's fastest birds known to capture their prey, mainly other birds, mid-flight.

This year's article in the Daily Olympian

Westlake Drive offers a clear, though somewhat distant view of the cranes and nest. 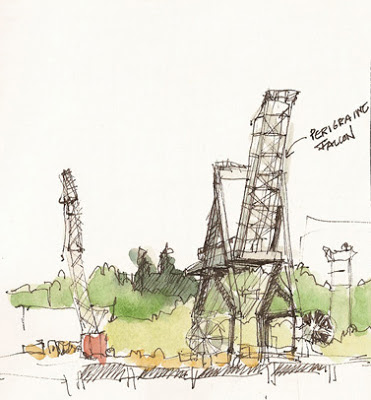 Dingey's also has a rubber duck collection. Drop yours in the orange bucket to grow the collection.  More importantly, there is also a donation bucket sitting just to the right of the telescope. Drop in a few coins or bills to help defray the cost of the telescope and to  show your appreciation for their interest in public environmental education. 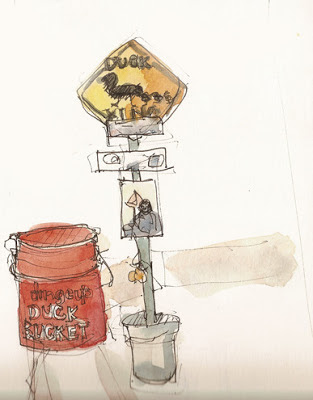 Posted by Jane Dillon Wingfield: janewingfield@gmail.com at 11:33 PM No comments:

It was a beautiful Saturday morning in Olympia. I sat down in the sunshine at a picnic table to drink my cup of coffee and and thought I'd do some figure studies. One grew to two, then I had to add some context...and some color. 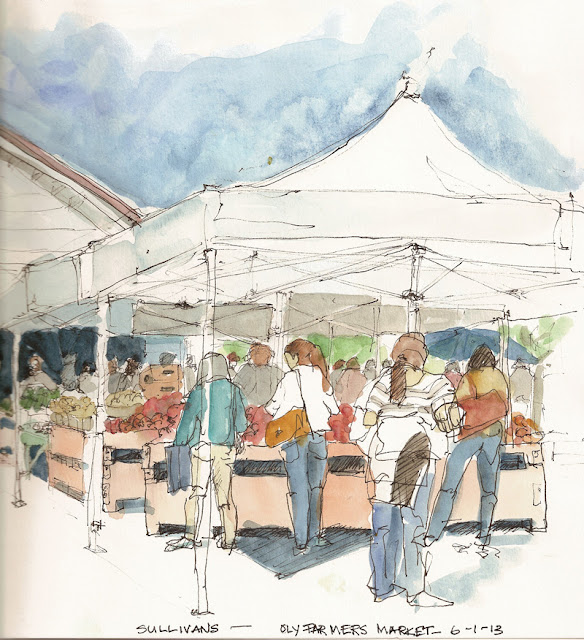 Then I went to the other end of the market. This time it was onions that caught my eye. 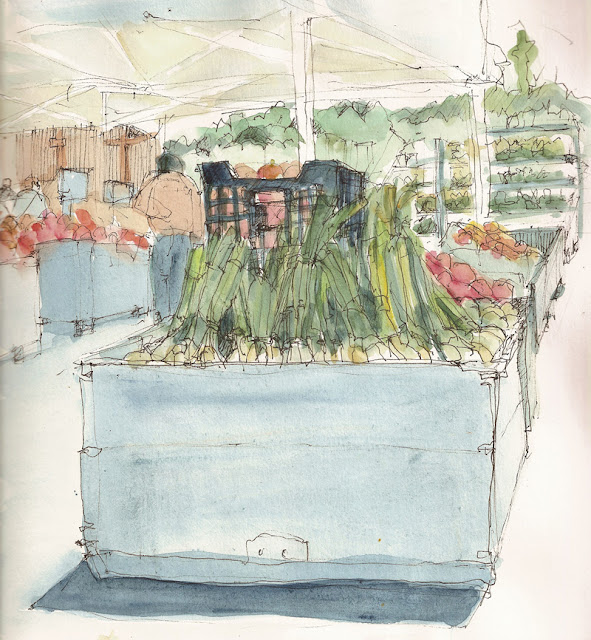 I'm sure I'll have more market postings this year, however, you can also view
sketches from last year.

Posted by Jane Dillon Wingfield: janewingfield@gmail.com at 9:22 PM No comments: