Last Friday, in honor of Olympia's Arts Walk XLVII, the main bridge linking downtown Olympia to west Olympia was dressed up in winter finery. A local group that calls themselves the Spectral Spiders organized this community project. Many community members contributed to the lamppost fashion show, some taking on a whole lamppost, others contributing pieces that were stitched together to cover a post. 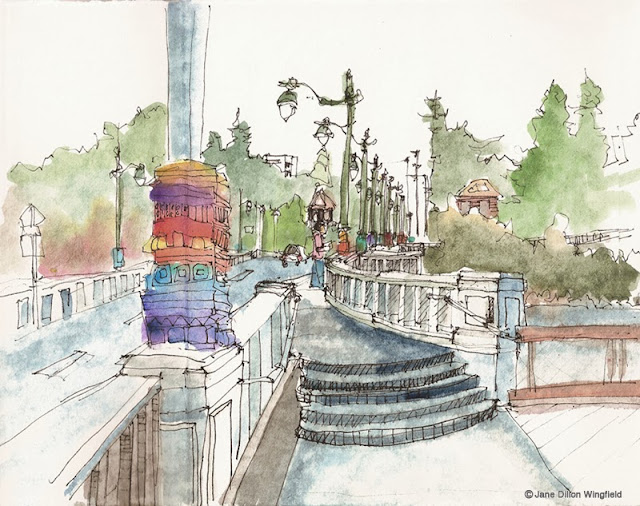 
Spectral Spiders warm urban environments with wooly wonder and weird whimsy through community creation of handcrafted textiles. We are based in Thurston County, Washington in Cascadia, USA, and we want a cozy world.


Judging from the smiles and comments posted and heard among the Arts Walk crowd, they've certainly warmed the hearts of Olympians.


The organizers termed this particular event a yarn installation because they had permission from the city, differentiating it from "yarn bombing" a popular form of guerilla/street art, albeit more widely accepted than most graffiti. Not only is it somewhat domestic (See NY Times article, Graffiti's Cozy, Feminine Side) , it is non-permanent and most often easily removed.  Too easily, it seems since at least three of the lampposts have been totally or partially defrocked. Street people desecrating street art?

Enjoy it while it lasts - it's only up until Sunday, October 13 at noon.

Posted by Jane Dillon Wingfield: janewingfield@gmail.com at 9:41 PM No comments: