A couple of wide angle lense views from Porto, Portugal

I'm just realizing I didn't post many sketches from the USK Symposium in Porto, Portugal. These are two of my favorites. They are both double wide 8 x 10 so about 16 inches wide. The first is the Dom Luis Bridge. I did it on our first group sketchcrawl with a few hundred other sketchers!

I intended to go back and finish this one; but I decided I like it just the way it is.

The temperatures in NY bounced around like a pinball machine. I got there during the polar vortex. Within four days it was up to 60 degrees. Then back to snow and cold and the last day I was there it was back up to 55.

So I went for a walk in the afternoon. The sun was just starting to cast that wonderful slanted light that I love. Visitation Church in Red Hook was illuminated. 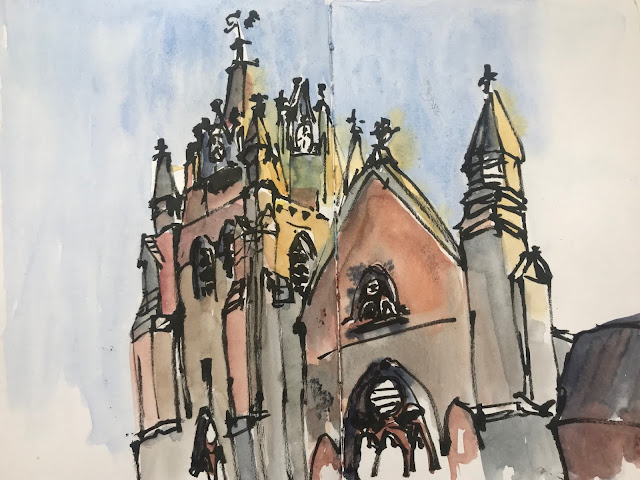 And the Red Hook Tavern, a new yet to open restaurant in the neighborhood was glowing. 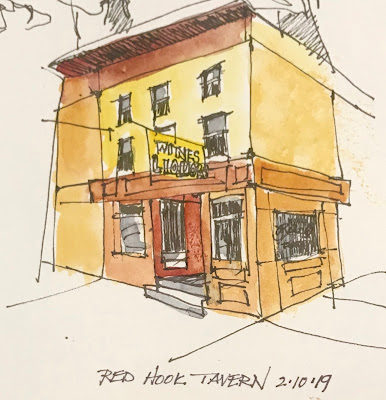 Posted by Jane Dillon Wingfield: janewingfield@gmail.com at 9:30 PM No comments:

A Gem on the lower eastside- Eldridge Street Synagogue

Another day, I headed off to the Lower Eastside. It's such a wonderful mix of cultures all mixed together. A beautiful gem embedded in the middle of Chinatown sits the Eldridge Street Synagoue. I missed the NYC urban sketchers outing a week earlier where they went there. It sounded intriguing so I set out to find it on a cold NY morning. The museum wasn't open yet so I went hunting for a coffee shop.  I found a Starbucks on the corner of Delancy and Allen warmed my hands as I drank my tea. Then turned around to see the busy corner. The yellow just popped out at me. 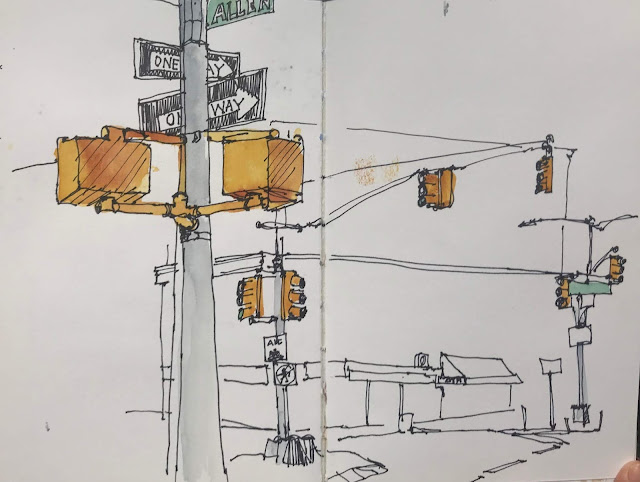 Once the synagogue/museum opened I found an intriguing history and a dark but beauriful interior. One of the more colorful stories included the time when the Jewish women in the neighborhood staged a massive protest when kosher meat went from 12 cents to 18 cents a pound. They interrupted a service at the synagogue and garnered a lot of media attention. And they managed to bring the price back down to 14 cents/lb.

In this sketch, I started with one of those well laid perspective plans, but I get too impatient. Not only that I couldn't actually see the structure very well due to glaring chandeliers,The  synagogue is very proud of the chandeliers, which used to be gaslight lamps, but their glare didn't really light up the interior as much as hide it. I tried to sketch beyond the lights and didn't include them in my drawing. 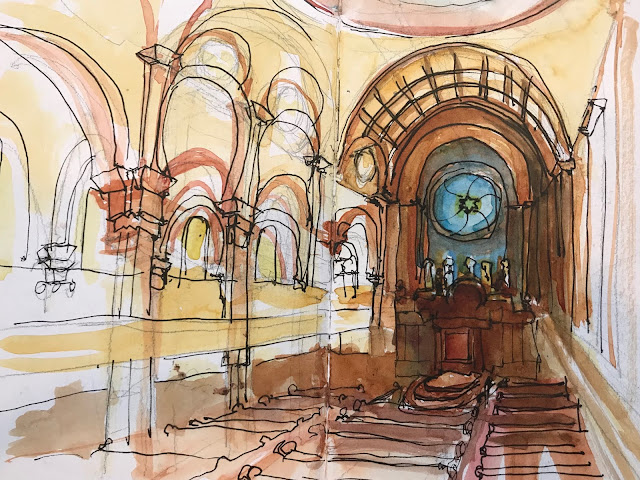 Posted by Jane Dillon Wingfield: janewingfield@gmail.com at 9:08 PM No comments:

The Highline and the Whitney - good companions

I stayed an extra week in NY due to weather in Seattle. My house in Olympia had no power, so I wasn't about to go from cold to cold with no heat. As a result I got in a bit more sketching. I started off towards the Whitney in the Meatpacking District. The white sawtooth south face makes the new Whitney recognizable. 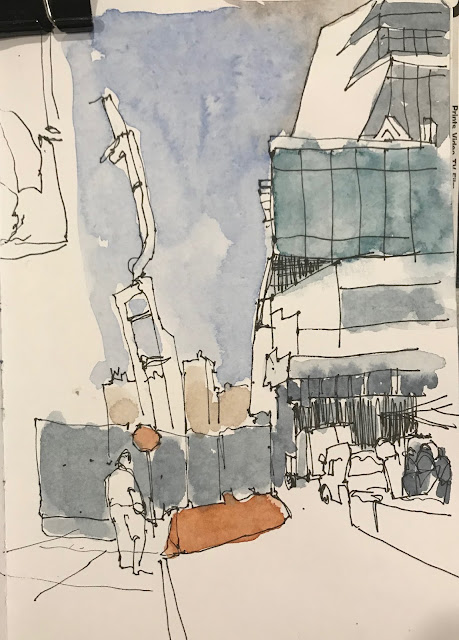 I went up to the Highline first. It was warm enough to grab a couple of quick sketches.  I love the rooftop water cisterns that dot the NY skyline. I've especially seen lots of them in SOHO and the Meatpacking district. 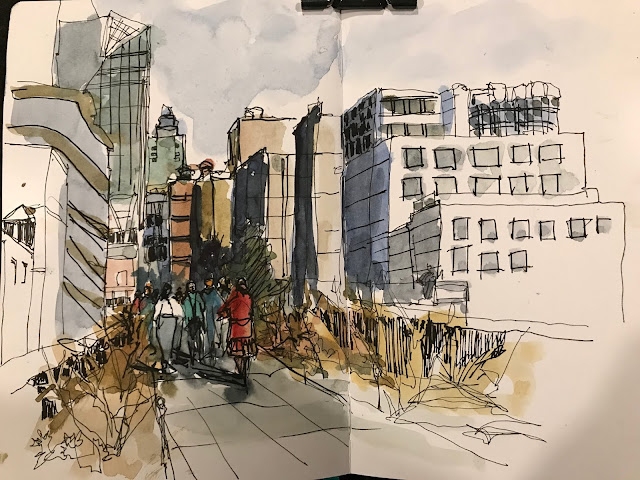 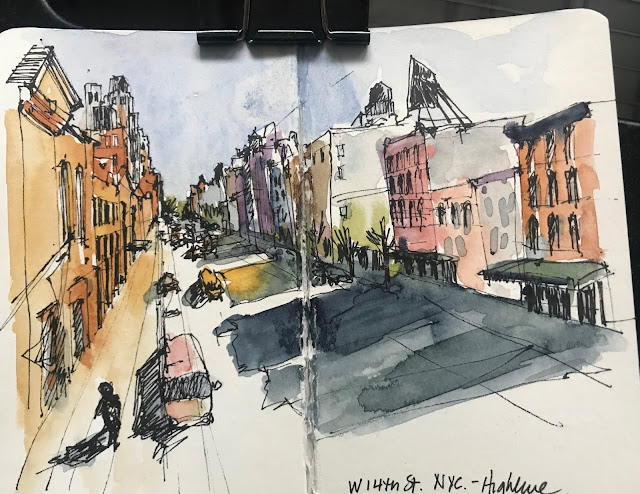 Before entering to see the Andy Warhol retrospective - a wonderful collection of his work. This was my favorite room - though there were many amazing pieces.

Posted by Jane Dillon Wingfield: janewingfield@gmail.com at 8:58 PM No comments:

After several months of planning to spend a few months in warmer weather this winter, we changed our plans and decided to stick around the northwest. January was going pretty well, then a family emergency called me back to the east coast right in the middle of their deep freeze.  It went from -6 on Thursday Jan 31 to 60 on Feb 5.

That burst of spring was very short lived. Saturday it was back down to 25. The New York City urban sketchers, however had scheduled a perfect location for a winter outing that day. And since family matters had settled down I was able to spend the day with them. We met up at the former Alexander Hamilton U.S. Custom House now Smithsonian's National Museum of American Indians in lower Manhattan.

I was able to sketch a couple of fellow subway riders on the way before finding the massive building in Bowling Green near Battery Park and Wall Street. 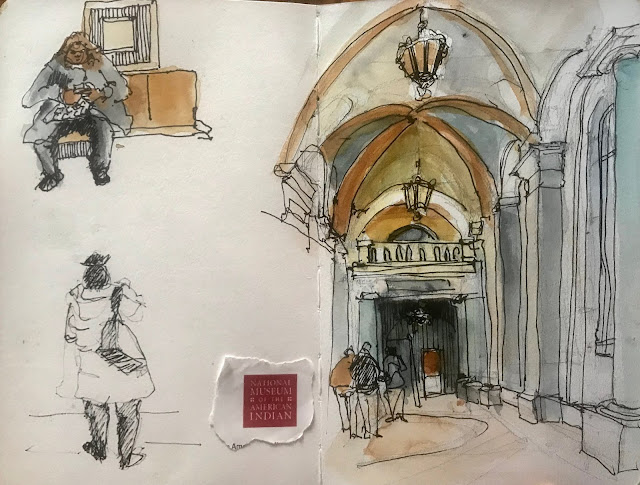 Joy Hecht, an urbansketcher from Newfoundland who uses collage as her medium, and is about to teach a 10x10 class, lent me her glue for the logo (the red square says "National Museum of American Indians".)

NYC urban sketchers meet from 10 to 3 every Saturday (!) so we broke for lunch and I found this peek-a-boo view from the restaurant window. 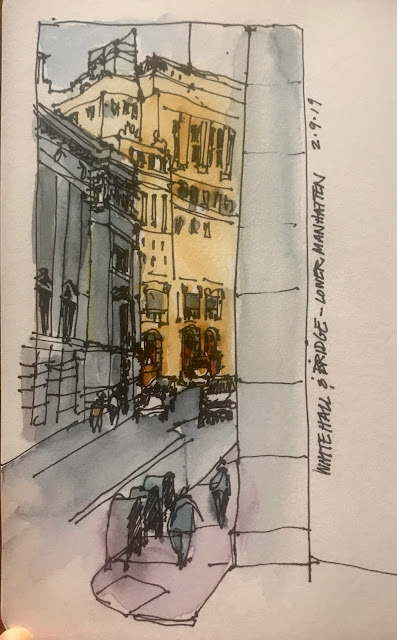 After lunch I braved the twenty-five degree afternoon to watch folks lining up in front of the Charging Bull. The sunshine helped for the fifteen minutes I stood there as did two down coats and my Uggs and fingerless gloves, but it was a quick sketch. 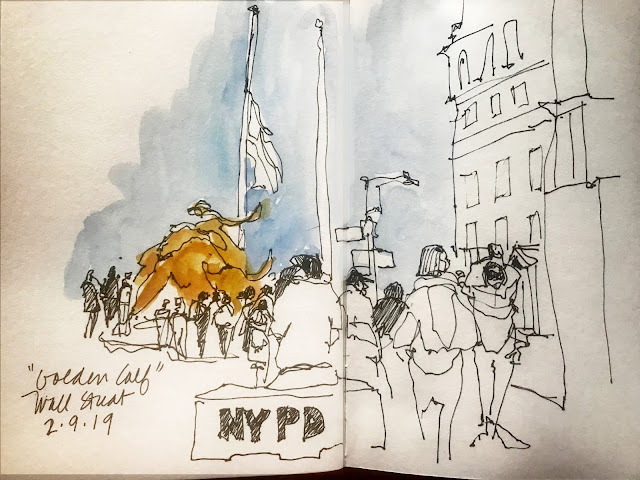 I went inside to thaw and watch the people watching the exhibitions. 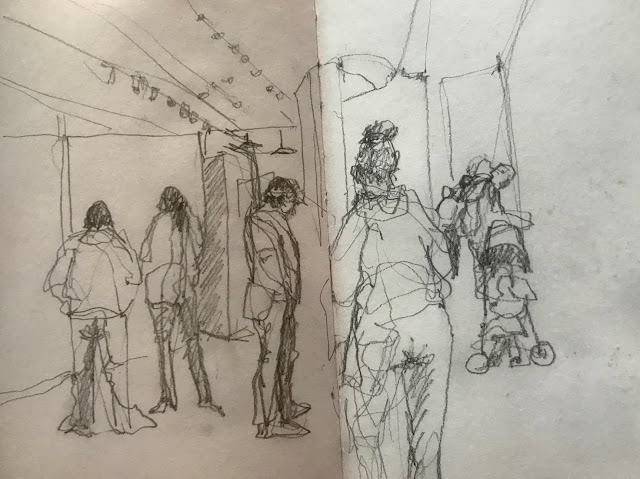 The "afters" was held at Murphy's pub around the corner where, New York USK style is to have everyone present their sketches show and tell style. Since I had missed their portrait party the previous weekend so I thought I'd throw in a belated offering, my tablemate, Linda Moses who had come to join urban sketchers for the first time. 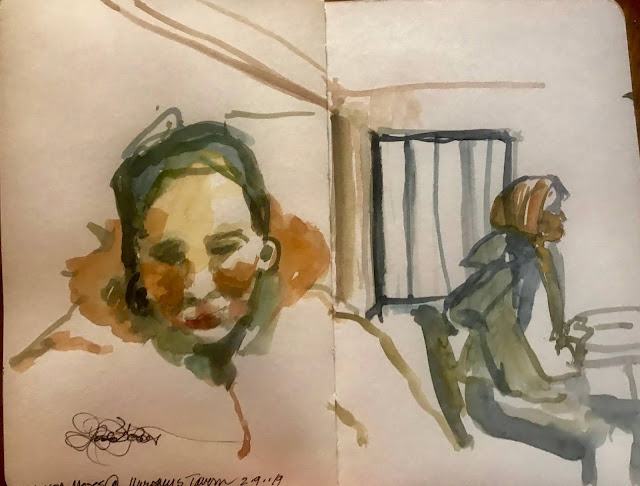 So the best laid plans of wintering in the tropics has had many bright spots and hopefully more to come.

The winter weather forced the opportunity to head indoors to sketch. And what better opportunity than to sketch people in coffee shops and subways.  They're nothing special but I do really remember these people and the enjoyment I felt to get out and sketch. 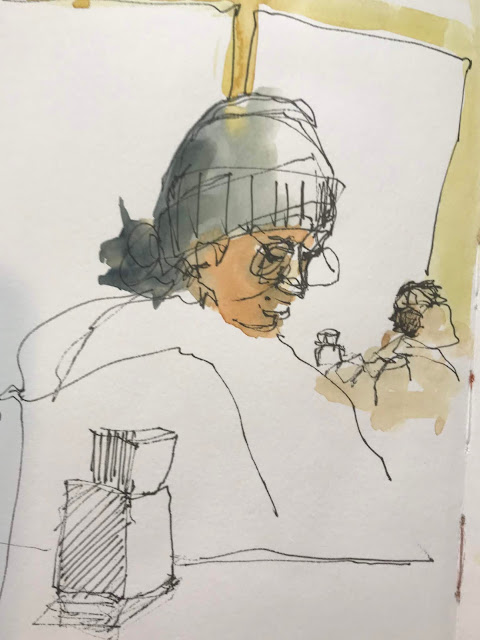 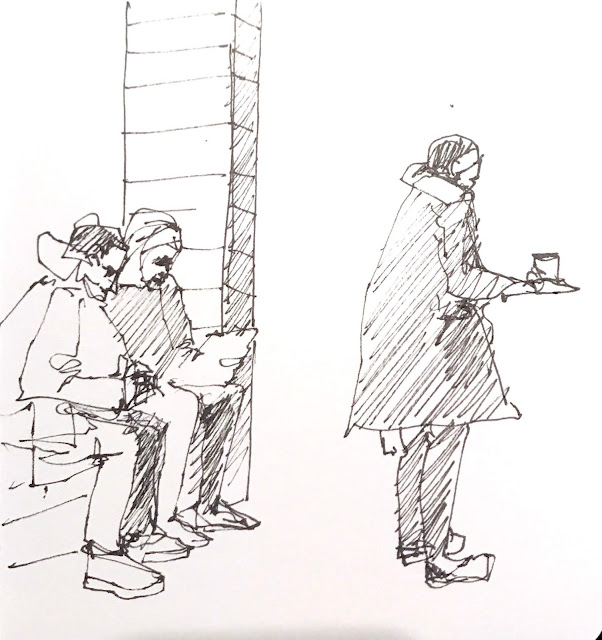 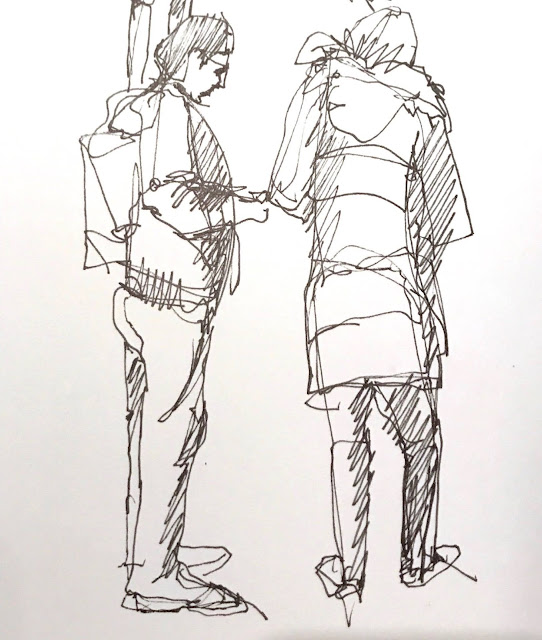 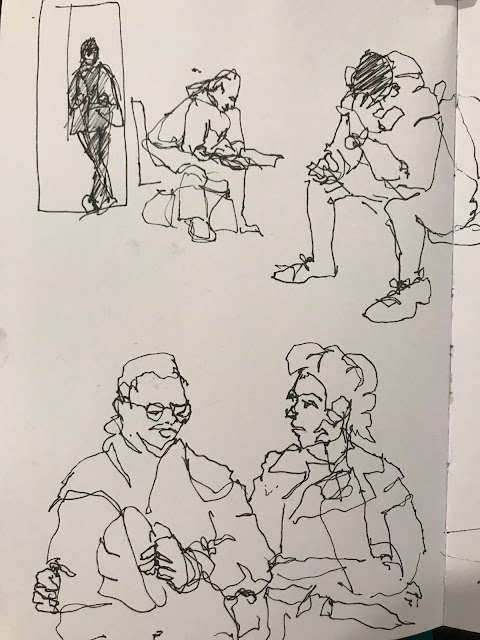 Posted by Jane Dillon Wingfield: janewingfield@gmail.com at 9:28 PM No comments: