Plan your year, one sketch at a time!
Back by popular demand - 2017 Calendars - now in two sizes. Select your size and then pay with debit, credit or paypal. Or contact me through email.

Want a signed print of the Old Olympia Brewery for $15? I have 8 copies. The Brewery is on the list of the Washington Trust for Historic Preservation. One of these prints sold for over $75 at a the  the Trust's recent auction. I'm selling them here just above cost. 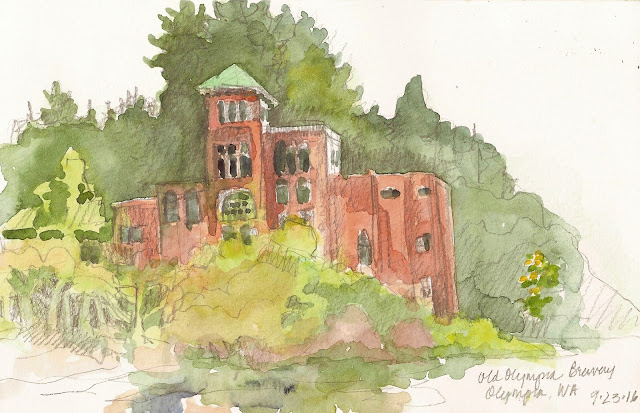 Posted by Jane Dillon Wingfield: janewingfield@gmail.com at 12:00 PM No comments:

Holiday Bikers on a Joy Ride

Three thousand five hundred motorcycles. That's the estimated participation for Olympia's 39th Annual Toy Run. Many cycles had two riders, and many more attended the event but didn't ride. In this town of about 50,000 the rumble of that many motorcycles makes a very audible mark.


The Olympia Toy Run started back in 1977 as the brainchild of Joe Sullivan who wanted to provide under-privileged kids with Christmas gifts and build a better relationship between the local community and the biker community. He envisioned the toy run as a way to do both in a big way.


Every year for the past 39, on the first Saturday of December, the motorcyclists from throughout the northwest roar through town bringing with them an energetic display of joy and generosity. "It's all about the kids," is the event motto.


The day starts with the annual Free Biscuits and Gravy Breakfast at the local Northwest Harley Davidson outlet. Cyclists start gathering about 10 A.M. in the Sears' parking lot of South Sound Center in Lacey. Vendors line the parking lot selling a variety of wares. Performances start at 11 - this year it was stunt riders.

The official ride begins at 1 P.M. proceeding from Lacey through downtown Olympia and ending up at Marathon Park beneath the shadow of the State Capital dome.  Thousands of spectators line the streets waving, calling and whistling to the riders.

Olympia Toy run donates all the toys and money they collect to the Salvation Army's Toys 'n' Joys Shop for distribution to needy families. 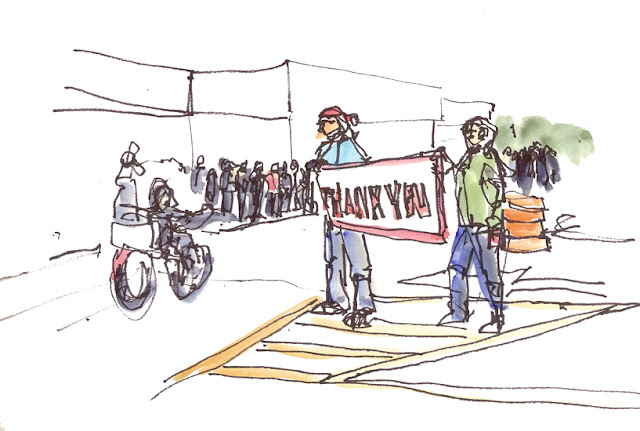 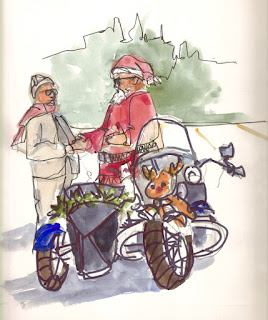 I arrived at South Sound Center around 11:30 after the performances. The lot was filled with black leather. Some groups sported their local club affiliation. I spotted the event organizer right away - Santa Joe Sullivan. He sat on his motorcycle with his side car at the front of the line wearing his Santa suit, welcoming  old friends, posing for photos with kids (some also sporting motorcycle leathers). While I was sketching, standing about five feet away from Joe, I watched as a young woman and two children approached. I saw the woman, who was a little teary-eyed, hand Sullivan a photo and watched as he received it tenderly. "He'll ride with us today," he told her as he tucked the photo into his saddlebag