The Danny Woo Gardens sit just across the street from the now famous Panama Hotel in Seattle's International District. Built by grants and private donations, the gardens provide space for the neighborhood residents to work their gardens amid the urban setting. 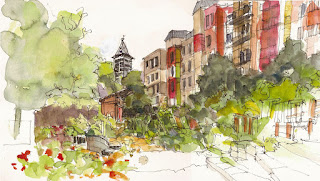 As I sat there drawing with my sister, just two days before China's President Xi Jiping was scheduled to arrive, a lion dance started down the street. Then a few black limousines arrived on the scene and men in black suits filled the sidewalk. It was the pre-delegation - those special emmisaries selected to arrive in advance of the Chinese President. They were heading into the Wing Luke Museum and had to pass us perched on our sketching stools. One stopped to inspect my drawing, telling me hi was an artist in Beijing. I thought about asking him if he knew the famous dissident Artist, Ai Wei Wei, but thought the better of it and held my tongue. 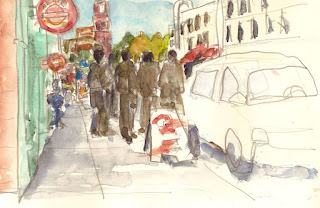 Posted by Jane Dillon Wingfield: janewingfield@gmail.com at 10:49 PM No comments:

Over labor day weekend we had the fun opportunity to visit Santa Fe for Cousin Bill's wedding to Patty. We flew in to Albuquerque and the next five days were a mix of wedding, exploring and sketching whenever I had a chance.

We started by renting a car. Sketching is always a useful pastime when waiting... 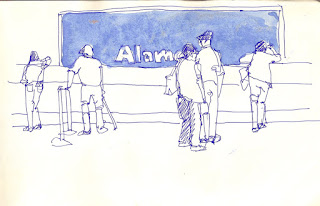 Presiding over a main street in downtown Santa Fe sits the Cathedral of St Francis, one of many churches in town. A bronze casting of a dancing Francis sits in the church courtyard. It's a delightful tribute to the well-loved saint.

San Miguel church is just up the hill. Said to be the oldest church structure in the U.S. and just across the alley sits the oldest house in the U.S. It housed the Mexican Indians while they built the church under the direction of the Franciscan padres in 1610.

Behind San Miguel is the Lamy Building, originally part of St Michaels College, now a government building and adjacent to where I caught the bus to go to Museum Hill. 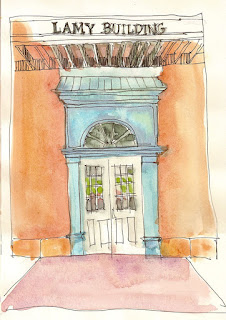 A few miles outside of town is Museum Hill. Four museums surround a large open plaza.

I only had time to visit the Folk Arts Museum and I was delighted to view  an fascinating exhibition called "The Red that Colored the World" which traced the evolution of the red dye produced by the American Cochineal, a tiny scaled insect that produces carminic acid.

Outside I liked the larger than life sculpture of the Mountain Spirit Dancer by Craig Dan Goseyun.

Shops, museums and galleries line the town plaza. The weekend we were there it was filled with booths celebrating Fiestas, the annual celebration of the date in 1692 when the Spanish re-captured Santa Fe from the Pueblo indians.

The Palace of the Governors sits on one side of the Plaza. On weekends Native American vendors sell turquoise and silver jewelry and native crafts. I bought a lovely turquoise money clip to weight down bills when I grab my sketching pens. 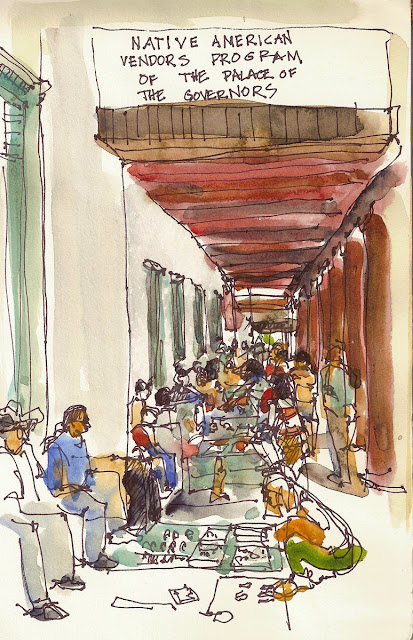 We took the High Road towards Taos and wound through small hispanic villages in the rolling hills.

One of those villages, Chimayo is hosts El Santuario de Chimayo, which is possibly the most important pilgrimage site for Roman Catholics in the United States. 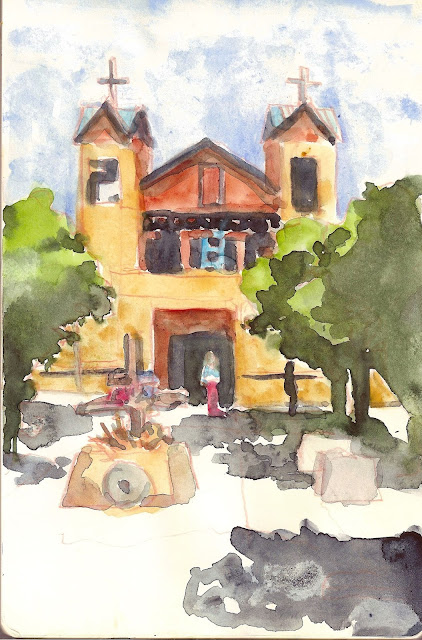 After Taos we decided to head over to Abiquiu and Ghost Ranch where Georgia O'Keefe lived  and worked. First we had to follow the Rio Grand heading south west to cut across some mountainous area. 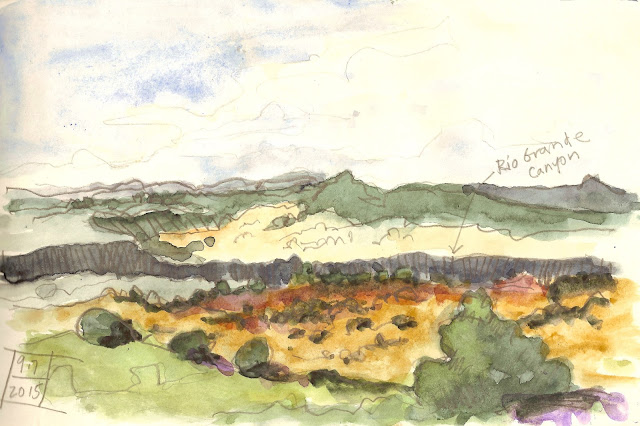 Ghost Ranch, a 21,000 acre retreat and education center north of Abiquiu, was unlike anywhere I'd been. It is open and wild, yet a deep sense of peace pervades the grounds. O'Keefe bought a portion of the ranch after her husband died. She lived and worked therefor many years.

Back in Santa Fe I found Our Lady of Guadalupe church on the westside of town. The statue of our lady presides over the church plaza adorned with flowers and rosaries, all ablaze in the September sun.

And oh yes, the wedding! 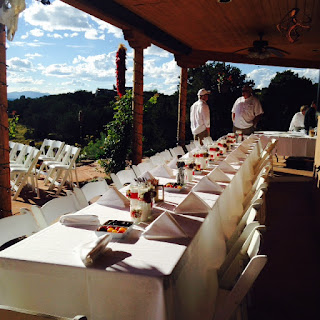 Posted by Jane Dillon Wingfield: janewingfield@gmail.com at 9:46 PM No comments:

Zozobra, Old Man Gloom. was banished once again as the 40,000+ crowd in Santa Fe chanted "Burn him! Burn him!". Arms flailing and eyes flashing fluorescent green, the puppet groaned and wailed as  school-aged "gloomies" taunted him and offered up personal troubles written by participants. The fire dancer in her red-sequined jump suit teased Mr. Gloom with her seductive moves. 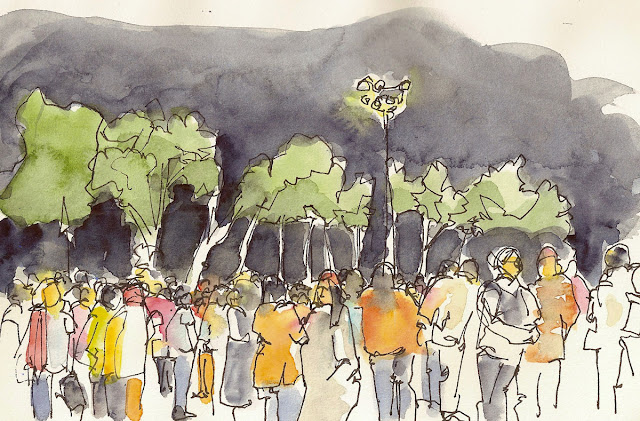 Police tossed beachballs to the crowd adding more anger and excitement to the reigning effigy. "Burn him! Burn him!",  cried the crowd until finally, no longer able to contain himself . . . 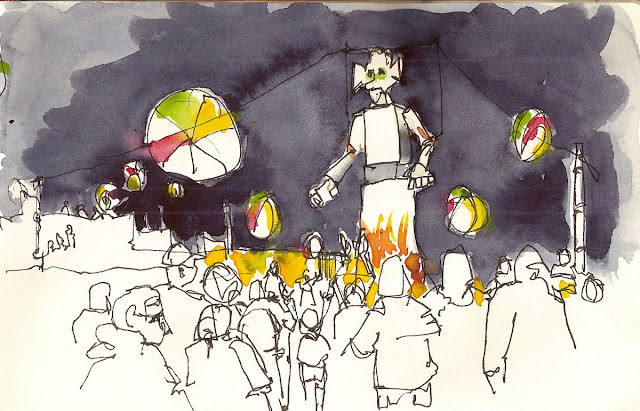 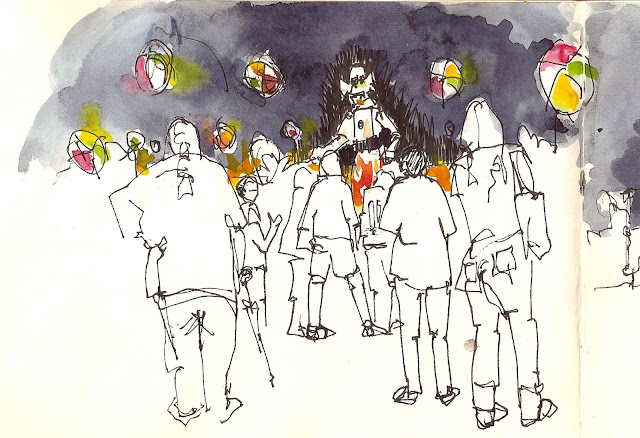 Old Man Gloom blew up. Lit from within, fireworks exploded igniting the flames. The fire grew, cackling and spitting. Zozobra moaned and flailed. His head rolled. The crowd cheered. And then... Old Man Gloom was gone. Banished for another year. 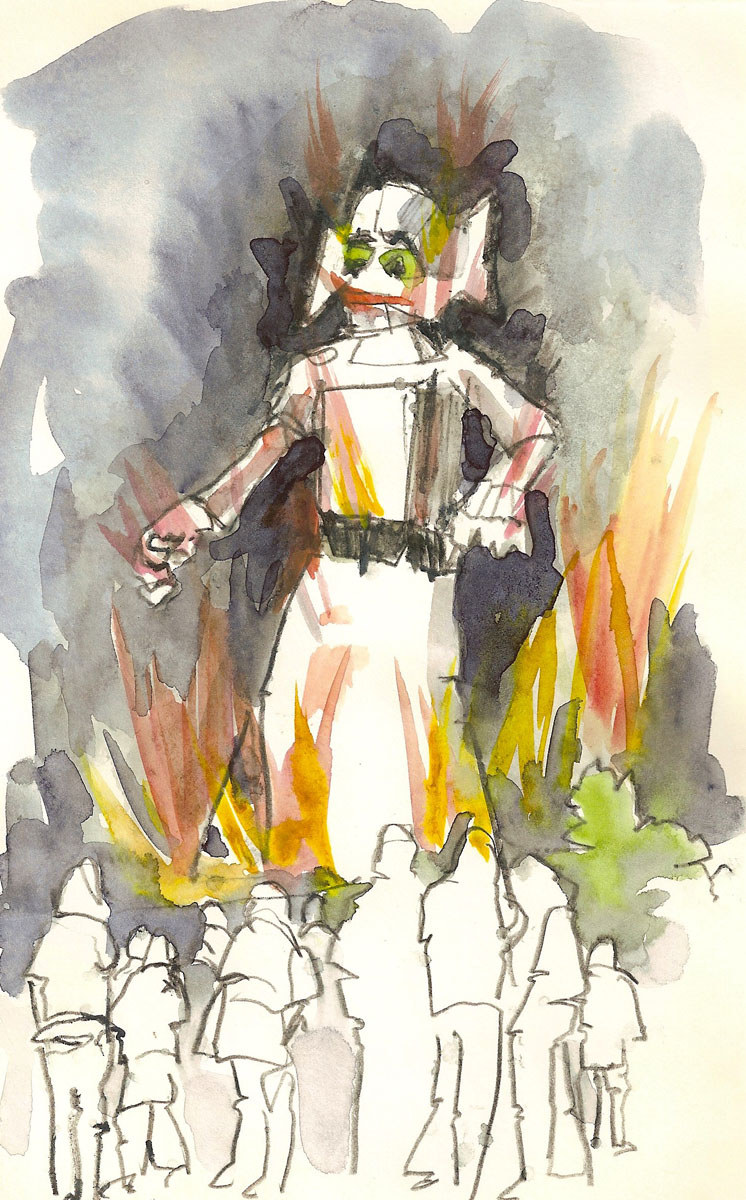 The ritual burning of Zozobra , Old Man Gloom, started in 1924 when Santa Fe marionette maker, Gustave Bauman teamed up with artist Will Schuster to create the first effigy. The puppet has grown from its original height from 6 feet to 60 feet tall. The event kicks off Fiestas in Santa Fe, the annual celebration marking the Spanish re-taking of Santa Fe from the Pueblo tribes in 1692.

Interestingly enough, Burning Man Festival in Arizona was happening at the same time. Researching the beginning of that festival I learned they had similar roots - a couple of guys independently decided to build an effigy and burn him on the beach in San Francisco. From that another annual event grew to become one of the most well know arts events in the world.

The archetypal root is not difficult to imagine; with the onset of autumn with winter darkness approaching who can think of a better way to offset the dread of winter than to banish gloom with burning hot flames?
Posted by Jane Dillon Wingfield: janewingfield@gmail.com at 12:34 AM No comments: