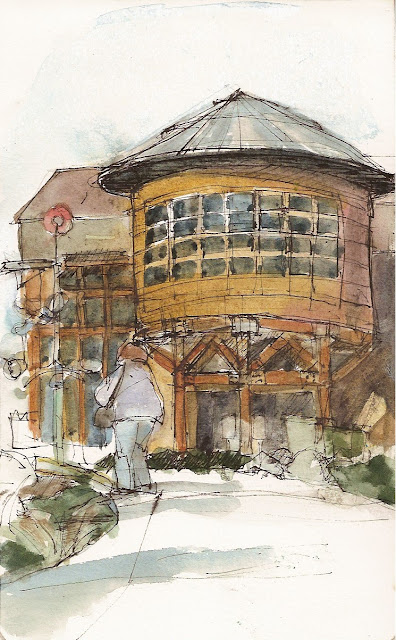 Hands On Children’s Museum in downtown Olympia held their grand opening this weekend this weekend. The 28,000 square foot building will be the largest children’s museum in the country when the outdoor space opens early next summer. For now, visitors will be greeted by galleries, an art studio, over 150 exhibits including the centerpiece and indoor climbing apparatus, Tides to Trees which allows children to climb an interpretive eagle’s nest and then slide down to an interpretive Puget Sound.

Hands On is the brainchild of a group of south sound parents who organized a roving museum without walls back in 1987. The group would develop theme based exhibitions and set them up wherever they could get space. The group acquired a brick and mortar space on Franklin street in 1994 but with 15,000 visitors /year the museum outgrew that site. In 1998 they landed a former restaurant space located kiddy-corner from Captial Campus  on the corner of 11th and Capital. With a growing audience, they knocked down walls and enlarged allowing them to host an average of 100,000 visitors /year.

Public Facilities District, PFD, funds allowed the city of Olympia to allocate $7 million in seed money to the museum. Olympia leaders contributed $1million more and then purchased some land  to construct the building. The leaders struck a deal to lease the museum building to the non-profit for $1/year. The museum organization agreed to raise the remaining $18.5 million for the building’s interior.

The result is a huge benefit to the community as the indoor/outdoor learning facility expands experiential learning with endlessly creative environments. The museum is expected to draw over 200,000 visitors annually.

Posted by Jane Dillon Wingfield: janewingfield@gmail.com at 5:54 PM No comments: