Yesterday I joined the South Sound Urban Sketchers at Great Wolf Lodge in Grand Mound. I'd driven past the place many times and was aware of its attraction to families as an indoor water/amusement park. I didn't expect the huge lodge lobby with it's massive stone fireplace, cushy seating and collection of stuffed wildlife. I decided to sketch a montage rather than taking on the massive lobby space. 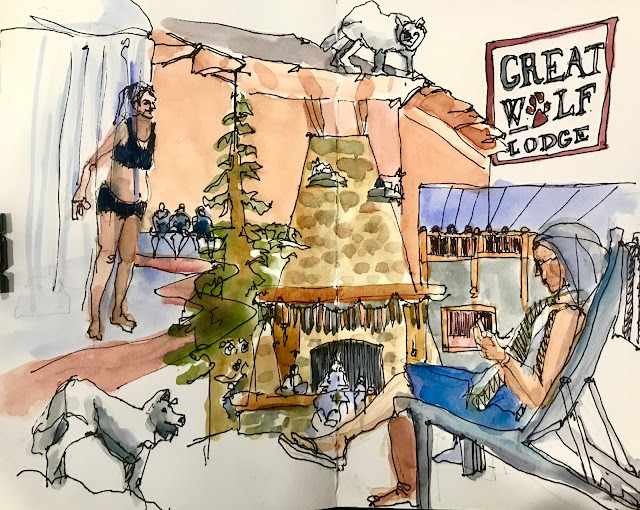 And clearly visible from the lobby was the massive waterpark--waterslides, beach chairs, spouting water, a wave-pool, and hundreds of bodies scampering about in bathing suits and striped towels. When I walked in to the pool area, it was so warm and humid my glasses fogged up. Fortunately once my glasses warmed up the lenses also cleared allowing me to sit and sketch this stretch of indoor sunbathers. 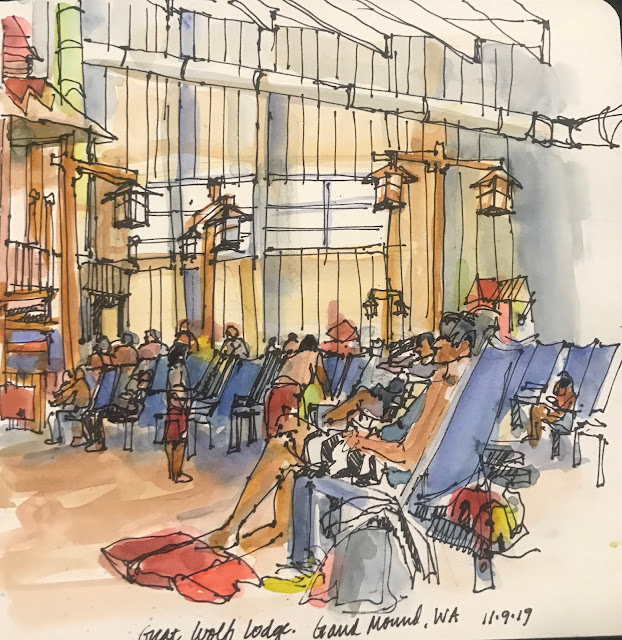 It was all so impressive especially since we could walk through and sketch anywhere on site without having to pay anything. Now if I wanted to hop in the pool or stay overnight ...that's another story. Thanks to South Sound Urban Sketchers for arranging this fun sketch outing!

When I was in the middle of raising three children I would dream of having a studio where I could have uninterrupted time to do artworks. Then I found Frederick Franck’s book: The Zen of Seeing, Seeing/Drawing as Meditation and I learned instead to make simple drawings, focusing intently on what was before me. That book by Franck - The Awakened Eye and Art as a Way, A Return to the Spiritual Roots were my touchstone to whatever shred of creativity I could muster. 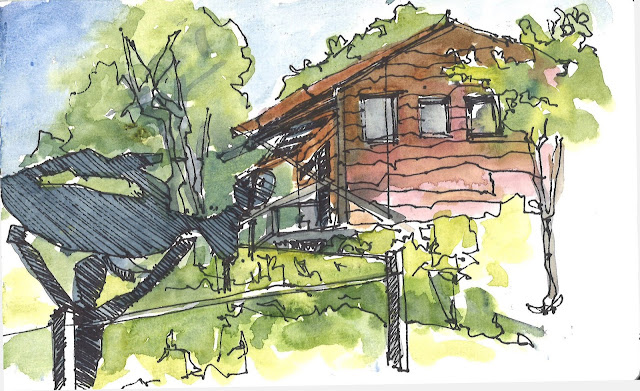 Last year while visiting in Warwick, New York I was surfing things to do nearby and to my astonishment came upon mention of Franck.

“Pacem in Terris is a trans-religious space created along the Wawayanda River in Warwick, NY by Frederick and Claske Franck. It is  "One man's work of art that aspires to be an oasis of quiet, of sanity, where spirit and nature may reconnect.  It is dedicated to what is Human in every human being"


I had to wait until summer to visit since it’s only open on weekends from May through October, but it was definitely worth the wait. 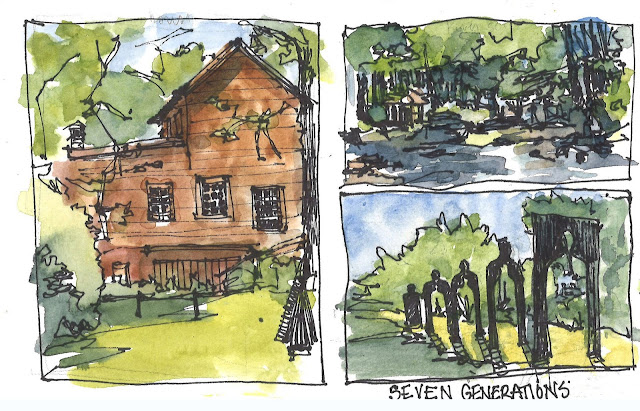 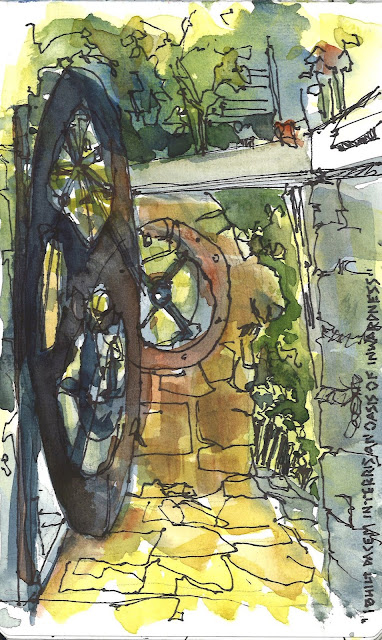 The site is inconspicuous from the road—no signage or grand entrance. Once inside it becomes an extension of Franck’s drawings—intimate and rich with meaning.  It sits on the Waywayanda River (more like a creek at that point) and has three separate entrances – one on either side of the river and another across the road. I first entered where the former Franck dwelling and some outbuildings sit on the east side of the creek. I was delighted to find some of Franck’s actual drawings on display. There’s also a small building with his stained glass of the Stations of the Cross and a video room where you can watch Franck highlight his life story including the Pacem in Terris project.

Several sculptures and a labyrinth wind in and out of trees allowing you to meander along the riverbank and contemplate the words of wisdom scattered in and amidst the sculptures.

On the other side of the creek sits the main building – a stone sanctuary completely dark inside save one candle and a bit of natural light. And across the road another sculpture garden and smaller meeting room are open for people to walk around.

The physical site is impressive especially since a lot of it appears to be handbuilt with wood and stone from the natural surroundings. The sculptures, mostly wrought iron, are bold and dramatic often with a message spelled out in hand-cut letters. The retreat site is dedicated to Pope John XXIII, Albert Sweitzer and D.T. Suzuki, all super-respected leaders in their respective faith traditions.


But what enthralled me the most was to see Franck’s drawings on display in the small gallery. I was taken back to my original inspiration for drawing on location – it’s not about creating great artworks. It’s simply about seeing and falling in love with the world.

This site has a nice collection of some of Franck's work. 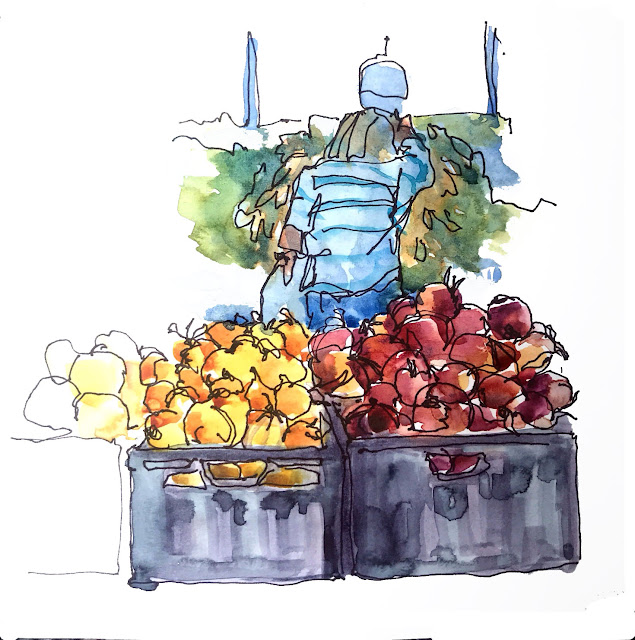 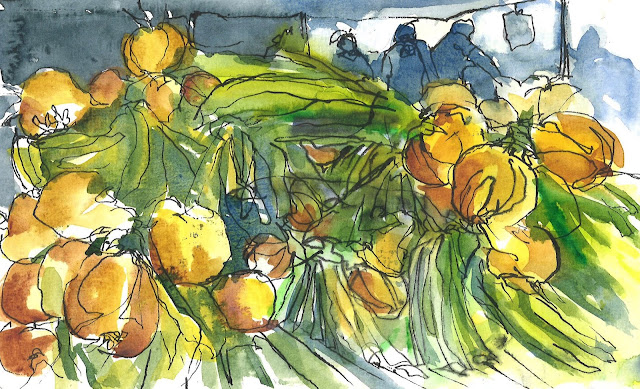 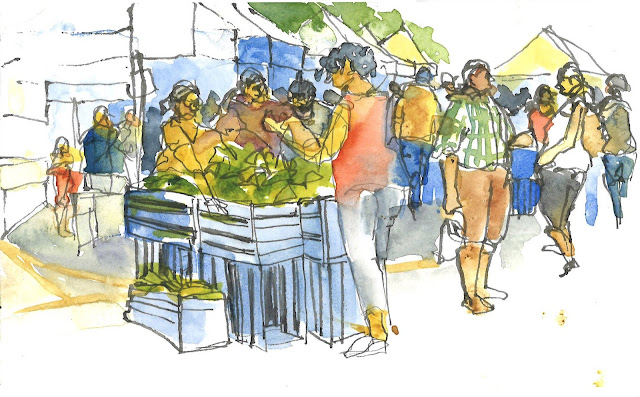 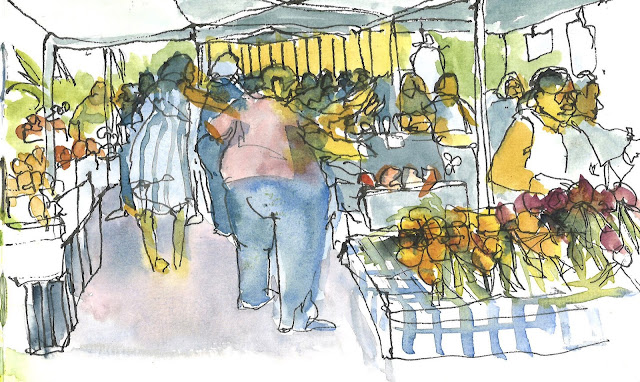