Habitat for Humanity in Seattle has a building site on Seattle Center grounds. Urban Sketchers visited in June and sketched the volunteers making bricks for the World House. Frank Gerry's Experience Music Project, with its colorful, contoured metallic surface provides a sharp contrast to the simple Habitat structures.

This larger structure is dubbed "Home of the Immediate Future". It's long and narrow, but designed to expand internally. Inhabitants can move the walls to create smaller or larger rooms as their family expands or shrinks. This structure will be moved to a building site on Rainier Avenue in South Seattle. 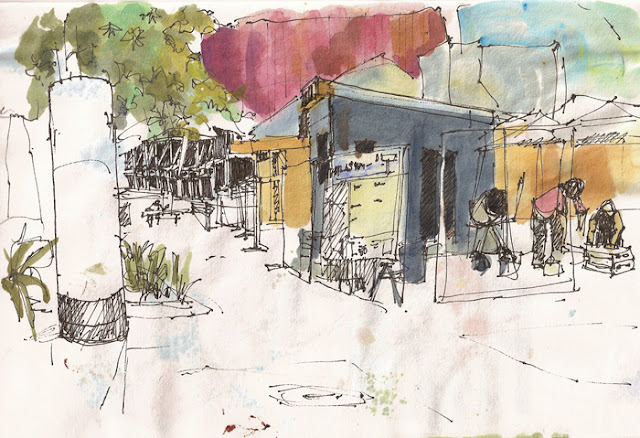 The small "World House" (about 12'x15') is typical of houses Habitat builds in third world countries. Currently there are many of these structures in Cambodia and other Southeast Asian countries. This structure would house about 6 people. Even though the climate allows for much more outdoor living, it is very small by American standards. The workers were making bricks for the structure's facade.

Posted by Jane Dillon Wingfield: janewingfield@gmail.com at 6:01 PM No comments: