Red Hook,the south Brooklyn neighborhood stretching below Atlantic Avenue to the Hudson River, is a place of contrasts. Sleek minimalist condos sit inside 19th century red-brick warehouses. The smell of salt water is halted by sewage reeking from pipes un-repaired since Hurricane Sandy. Construction cranes hum alongside dilapidated buildings. Wildly reviewed restaurants buzz just a few paces from the local bodega.
One of the neighborhood's distinguishing characteristics is the open sky. The buildings are short compared to the city, especially across the river in Manhattan. The proximity to the water gives Red Hook the feel of a beach town, but definitely not a resort. It's just the kind of place artists and young urban families crave--cheap rent (until a couple of years ago), parks, plenty of real estate to renovate.


We visited Red Hook this year to celebrate the one year anniversary of Hometown BBQ. I wrote about their opening in a post last year. This year I had some time to explore and do some sketching in the neighborhood. I stood on the streets and did my thing. Here's a map of the neighborhood (I took small license to use this even though it's a sketch from a map): 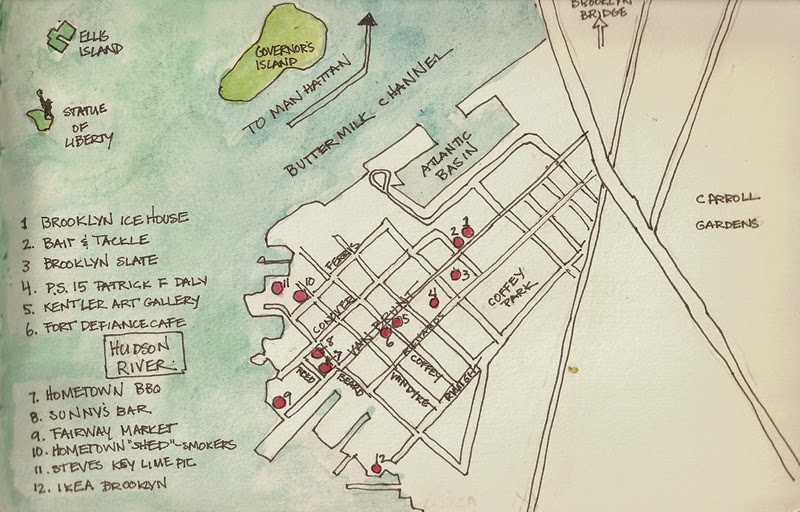 Van Brunt is the main street running from Atlantic, a main thoroughfare in Brooklyn, to the water. I started with the Ice House and its neighbor, Bait and Tackle, the local watering holes and the places to find people who know Red Hook.


Further down the street you pass chic urban shops, vacant lots, galleries, rusted trucks, and a custom-made bicycle shop among the array of businesses. Kentler International Drawing Space attracts my attention every time I visit, but I haven't managed to make it in to see what it's all about. Hers's a few street images:
Hometown BBQ sits at the base of Van Brunt on Reed, just across the street from Fairway market, a massive grocery store selling everything from quarters of beef to Brooklyn Kombucha. Around the corner from Hometown on Conover is the legendary Sunny's Bar, owned by the Balzano family since 1890 and currently run by Sunny Balzano, "The Grandfather of Red Hook." You can read about Hometown and Sunnys in my posts from last year.

A new addition to the neighborhood is the Hometown Shack--where they smoke all the meat on wood-fired smokers. Two shipping containers handle a couple of smokers and a couple more sit outside next to the gravel yard. In the summer you can get your ribs and sit at the umbrella tables taking in the smoke flavored salty air.


A few paces from the Shack Louis Valentino, Jr Park and Pier locals can fish while enjoying possibly the best land view of the Statue of Liberty in New York. The park and pier are named after a firefighter and parks lifeguard Louis J Valentino who lost his life while searching for wounded fellow firefighters.

The lower Manhattan skyline stretches along the water, dominated by the new World Trade Center. I happened to be there on September 11.

World Trade Center from Valentino Pier, Red Hook
We visited the Red Hook Initiative, a local non-profit that serves the neighborhood by providing job training and many other services. That's a story in itself. This quote by it's founder Jill Eisenhart, describes Red Hook aptly:

"If you ask an outsider what makes Red Hook special, they'll talk about the parks and open spaces, the waterfront views, the cobblestone streets, the great businesses, churches and agencies that creat the fabri of the community. If you ask someone from Red Hook, they'll tell you the secret: It's the people who live here."
From Images of Red Hook, by Thomas Rupolo

Posted by Jane Dillon Wingfield: janewingfield@gmail.com at 10:06 PM No comments: