Take it or Leave it 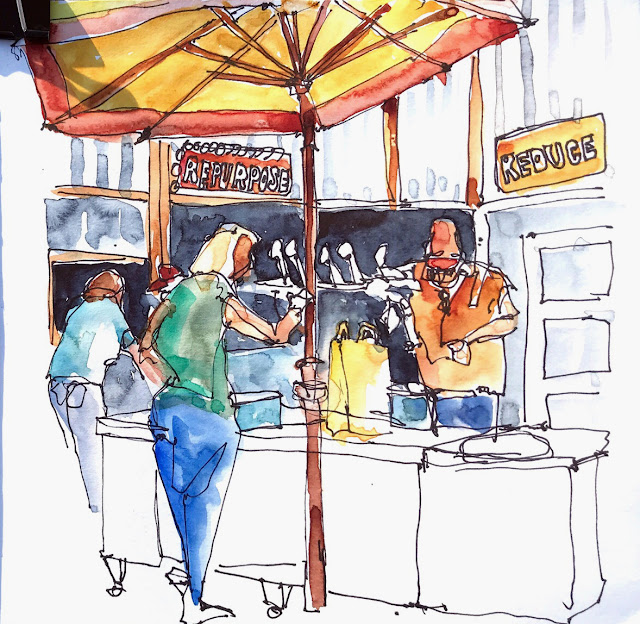 I first heard about Lopez Island’s unique trash collection system, last summer when visiting the island with friends. We met Kate Scott, an artist and long-time Lopez resident who, during the course of our visit, showed us photos of the Trashion Show, an annual fundraiser for the Lopez Solid Waste Disposal District. Although the show has retired along with it’s coordinator, it is evidence of the creative community on Lopez. While visiting “The Friendly Island” again this year we got a closer look at the story behind the show. 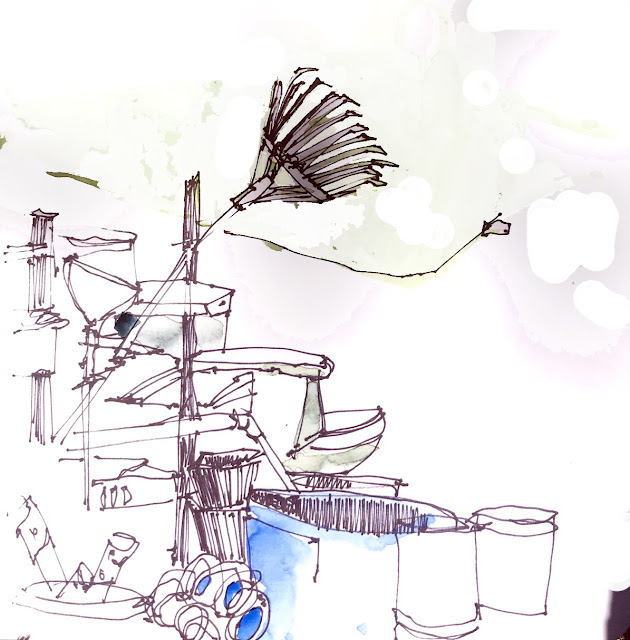 It seems back in 2011, the San Juan County Council decided to stop operating wast facilities on all of the San Juan Islands. They wanted to contract with commercial carriers on the mainland – out of sight out of mind.  Lopez Island residents voted with their signatures and pocketbooks, committing to establish their own district and take care of their own trash. 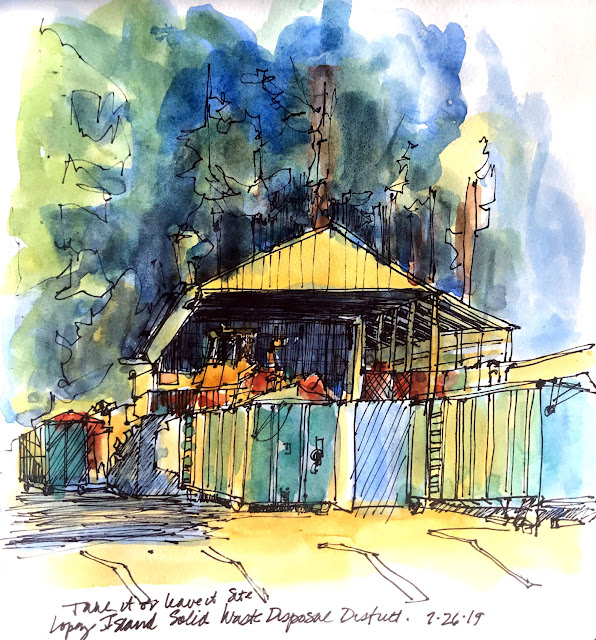 We came upon the solid waste disposal site while walking along the road on our way from our boat to Lopez Village. I’ve never seen anything like it.  First, they have a giant free store—“Take It or Leave It” where folks bring stuff they don’t want any more--stuff you might give to Goodwill or donation center that runs a thrift store. On Lopez people can just go pick out what they want. Volunteers accept and sort the second-hand items, all usable, clean, to-good-to-toss. “It’s been open since 2015”, the woman at the receiving table told me, “all run by volunteers.” Islanders and even visitors can pop in and select what they want and walk away. We found a sharp knife, a spatula—two items we forgot to bring on our boat—and a small boat bumper for our bow. The place was as busy as our next stop, the farmers’s market. 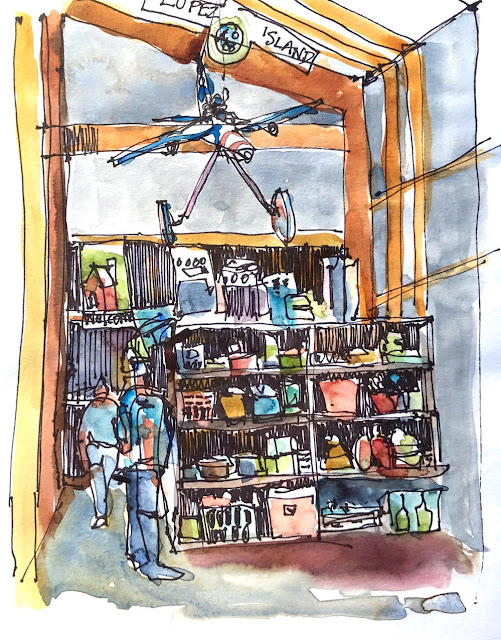 At the market, SWAP runs a booth that sells skirts sewn from recycled t-shirts and shopping bags made from plastic feed sacks. The booth was staffed by all volunteers. one them, Kim Norton, current chair of the Board of Directors, told me the story. “Every month I send out an email to about 40 people”.  She rents space at a local church, sets out old t-shirts and patterns and people come to design and cut the skirts. “We have a design party. People come and cut the t-shirts up and design the skirts. Then we give them to volunteers to sew. All the money goes to the Lopez Solid Waste Disposal District.” 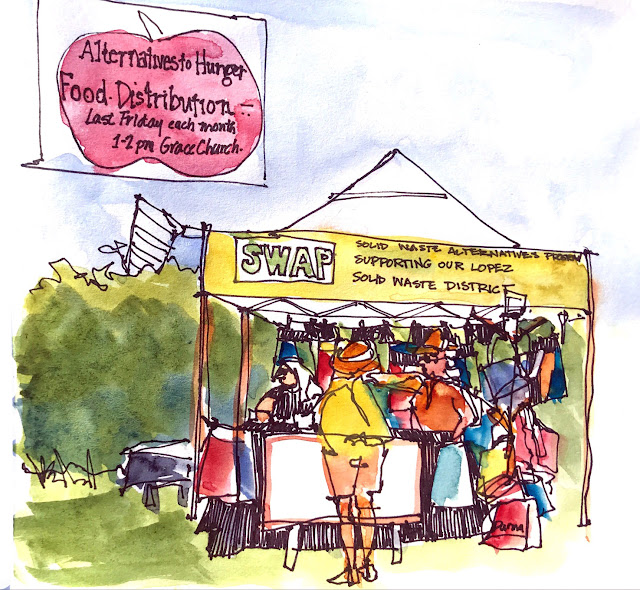 SWAP sponsors school activities educating students about zero waste, earth day clean-up, and volunteer appreciation events. Their proceeds helped purchase a backhoe for the disposal site, and equipment for a “remake lab” and fixed holes in the road at the dump. They also fund a levy to provide funds for the disposal site and provide a scholarship for a graduating high school senior.

SWAP also sells “Junk Bonds,” created by local artists that sell for $25.00 and are “not redeemable for anything”. One whose image I found through Google sums it up, “Its not just a transfer station, It's a philosophy.” 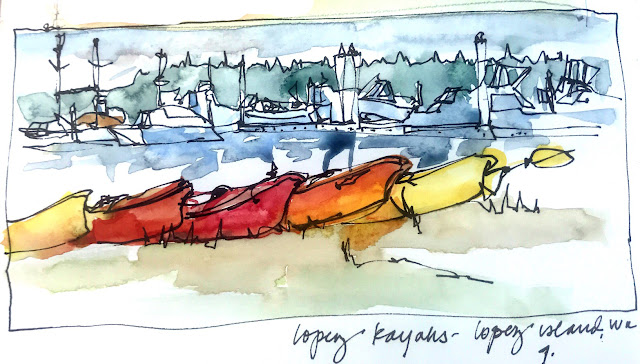 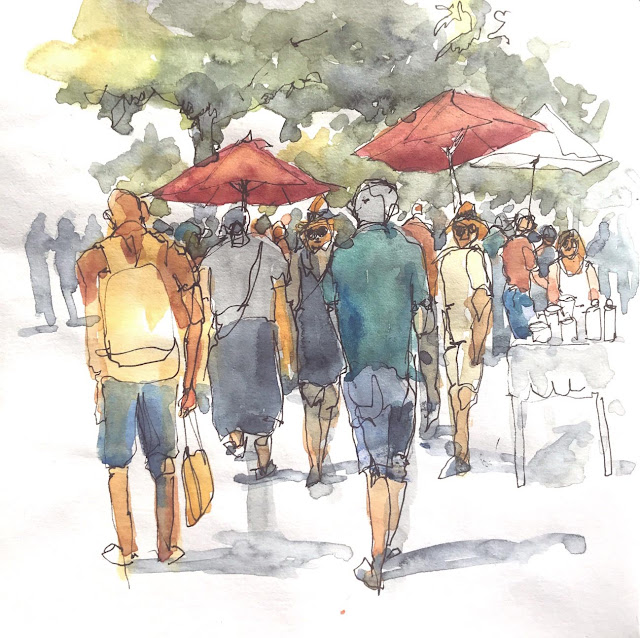 Friends have been telling me about the Saturday Market in Ganges on Salt Spring Island, for years. What’s another market, I thought. Lots of white tents, great produce, arts and crafts – what’s the big deal. But last week while visiting the Gulf Islands we were fortunate to spend a few days in Ganges and I was delighted that stay included a Saturday Morning. 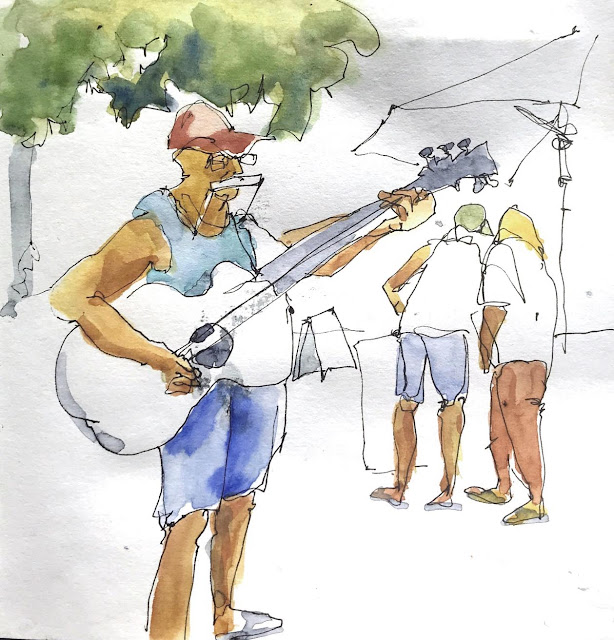 To some degree my predictions were right. There were lots of white tents, red, blue and green sunbrellas, scads of shoppers and musicians busking here and there. But as I moseyed my way around I was really impressed by the quality of the goods. The jewelry was rich and varied from fine metal work to beautiful tumbled glass and hand-crafted beadwork. The pastries were everywhere—raspberry French tarts, croissants and pain au chocolate, crusty breads, Montreal bagels. I bought a pear “danish” and savored every bite. 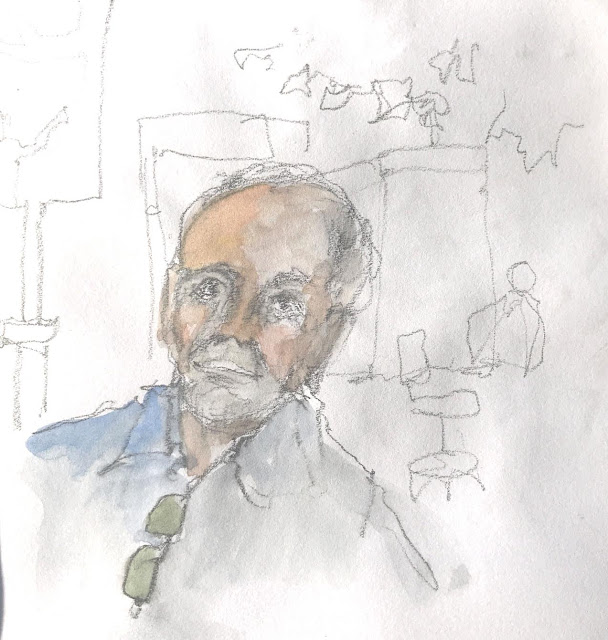 As if all of this wasn’t plenty, the absolute highlight of my visit to the Saturday Market came by total surprise. As I entered the main pathway, I saw a small table with cds and books featuring a Baby Beluga game. Since we raised our kids on the song and sing it to our grandkids all the time, I stopped and was checking out the books. The man at the table was chatting with someone and I looked at him closely, then asked the woman next to me incredulously, “Is that Raffi?” Sure enough. In person. Turns out he lives there and has started a foundation called, “Child Honoring”. We chatted for quite a while. I was so impressed with his serene and absolutely lovely demeanor. He had no qualms when I asked if I could sketch him. I was over the moon with delight. After, I am a bona fide #belugagrad!

Indigenous people have been in the area for over 3000 years; the town’s name has a connection with the holy Ganges in India. The counter culture is alive and, as one writer said, spiritual healers have become an invasive species. Seaplanes roar in and out of the harbor. There are loads of contrasts on this, the biggest town on the biggest of British Columbian’s Gulf Islands. But I was curious about the name of the bay - Kanaka. 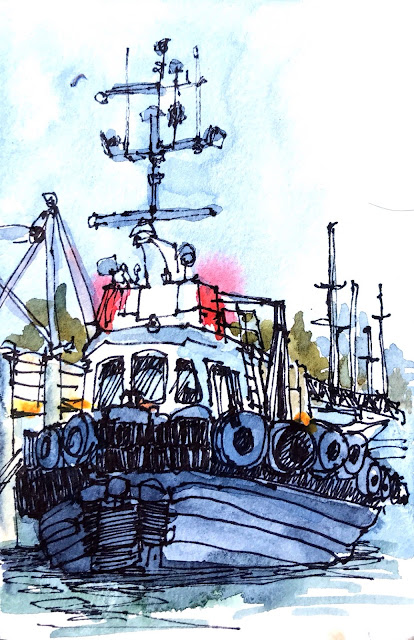 It’s Hawaiian; it means “person” or “man”. But why this Hawaiian name here, in the Gulf Islands of British Columbia? It turns out back in early days of white settlement Many Hawaiians came to work for Hudson’s Bay Company as immigrant laborers. Here in Salt Spring they were contracted for a term and then free to do what they pleased after the term was complete.  Some stayed right here in Salt Spring. I tried to find evidence of the Hawaiian culture beyond the name of the bay. A local told me down in the town of Fulsome, there are gravestones with shells on them. “And Oh yes,” she told me there are the Hawaiians themselves. “ 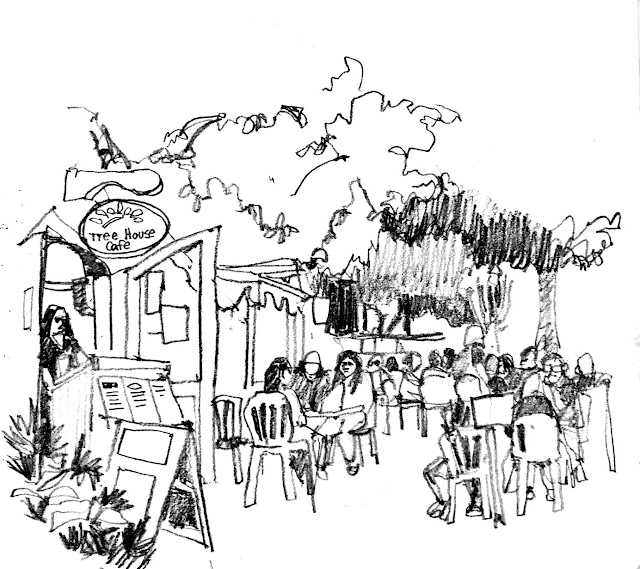 So no Hawaiian artifacts, but the island lifestyle is definitely evident. Lots of tourists, lots of boats, lots of music in open air bars and restaurants. One of the more well known is Treehouse Café, with live music nightly, indoor and outdoor seating and a giant tree growing right through the roof.

Strolling through town I passed the Courtyard.  Bagels hung on string across the counter window. Who can resist hanging bagels? Not just any bagels, these were Montreal bagels.  They look more like bialies that I saw on the lower east side of Manhattan. I ordered one covered with lox and cream cheese. It came with a yellow and orange pansy sitting on a hand hewn wood cheese board. Absolutely delicous.

The bagel shop was a recent addition to the gallery, Hiro, the owner told me. “ We just opened it 2 weeks ago.” Hiro, is a Polish trader who commissions woodworked objects in Indonesia and brings them to sell in his gallery here on Salt Spring. His Japanese wife, Miro, manages the Montreal bagels. Hiro and Miro. 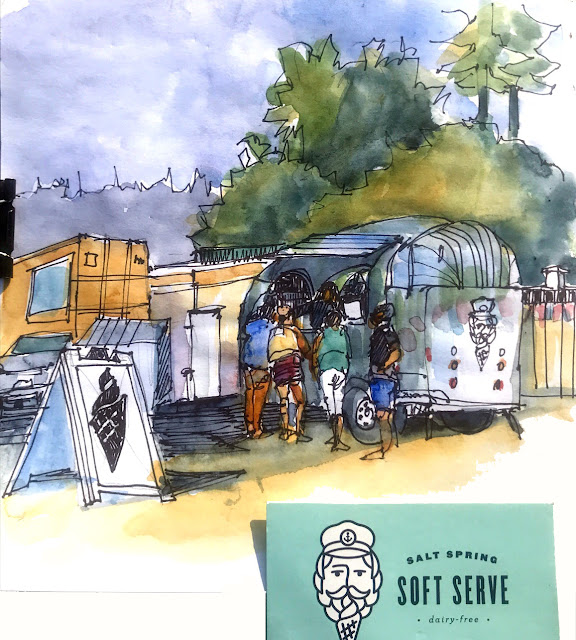 Just across from the Courtyard is a shiny new airstream mini, the home of Salt Spring Soft Serve. The owner Chris told me, “I mix cocktails for a living.”  He and his family moved to Salt Spring from Vancouver B.C. two years ago. “We didn’t want to raise our kids in downtown Vancouver.” For a while he commuted then just two months ago, after testing recipes for his dairy free, coconut and oat milk based soft serve, he opened his ice cream truck. “It wasn’t hard to go from mixing cocktails to mixing sundaes,” he said.

We really just tapped the surface of this interesting Canadian town and I hope to visit again.
Posted by Jane Dillon Wingfield: janewingfield@gmail.com at 6:50 PM No comments: