With the flip of a coin in 1898 Abbott Kinney won the rights to the marshy tract of land along the Pacific Ocean just south of Santa Monica. A businessman and real estate developer, Kinney developed his vision to create a cultural mecca - the Venice of America - while traveling in Europe. Despite his efforts at establishing a cultural mecca with gondolas and gondoliers  the dream morphed to accommodate the tastes of the beach-goers and summer holiday guests--the Coney Island of the Pacific complete with freak shows, foreign exhibits and carnival rides.

The canals have been cleaned up and the area has become one of the most desirable residential areas in Los Angeles. We walked the public paths that line the canals and provide a glimpse into the backyards and living rooms of residents.

The Venice Boardwalk borders the beach and maintains the amusement park identity. Cheap eateries, psychedelic shops and medical marijuana dispensaries lure locas and tourists alike. We were warned off the strip after dark "when the gangs come out".

A couple of blocks inland Abbot Kinney Avenue attracts a different set - hipsters and shoppers with enough expendable income that allows them to shop in the boutiques and eat in the upscale restaurants or at least pose in the daily line at Intelligencia coffee.

I did a quick sketch on the LAX Shuttle bus as we toured the parking lot dropping folks off at their respective lot locations. 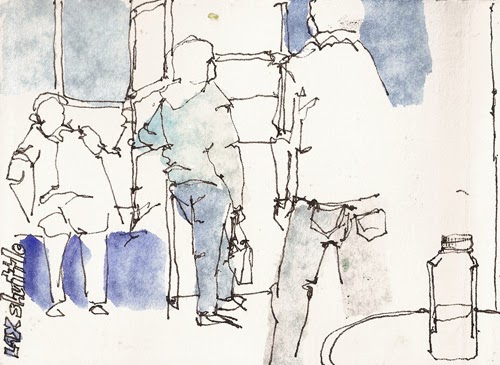