We had a lot to be thankful for over the Thanksgiving holiday. We joined some family members in the Los Angeles/Santa Monica area, enjoyed some sunny California weather and learned of another new family member to be born this spring.

For the sake of expediency, I'm posting a collection of sketches from that trip.


Hollywood is packed with sketchable locations. TCL Chinese Theater (formerly Grauman's Chinese Theater) is an essential landmark on the Avenue of the Stars. Apparently when it opened, a riot broke out as fans tried to catch a glimpse of their favorite celebrities.
Parmahansa Yogananda founded the Self Realization Fellowship in California, being one of the first to bring yoga philosophy and practice to the US in the early 1920's. The Lake Shrine, situated just up the hill from Malibu in the Pacific Palisades, is a wonderfully peaceful oasis so close to the bustle of LA.
Grand Central Market sits comfortably in the former entertainment center of downtown LA. Built in 1917 it was the green grocer for the neighborhood residents. It was refurbished in 1984 and now hosts not only a patchwork of food vendors, but a varied menu of events: game night every Thursday, free concerts, holiday markets and more.

Shinique Smith's "Forgiving Strands" welcomes visitors at the rear entrance to Hauser, Wirth and Schimmel. This internationally known gallery of contemporary art took over a 100,000 sq ft flour mill in the downtown LA arts district. I loved this piece of bulbous fabric twists, stuffed, tied and looping through the hallway. The contrast of these lush, plump textiles and the stark, concrete hallway was a gift to my tactile sense.


Third Street Promenade, the outdoor mall, in downtown Santa Monica. I stood under an awning at 3rd and Arizona while a rare Santa Monica rain storm pounded the pavement all around me. Some amazing musicians play/sing on the promenade.
Bergamot Station- a collection of offices, architectural firms, galleries and shops in Santa Monica. It houses Hiromi Paper Inc., a warehouse/store with a delicious inventory of mostly Japanese papers. It whet my appetite for paper making again.
Iconic Santa Monic Beach - lifeguard stations and slack line artists walking their flat, slack tightropes, twisting their limbs to maintain balance - all makes for great sketching on the beach. These lifeguard stations are surprising difficult to draw!

Los Angeles, one of the few places where the subway has to stop for traffic and vice-versa. Actually "sub" way is a misnomer since most of the track is above ground. Nonetheless, it's public transportation that runs from downtown all the way to Santa Monica. And it's cheap! 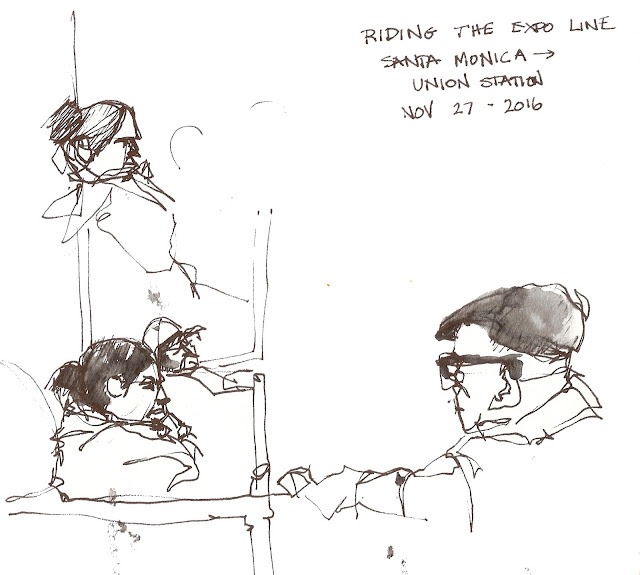 The Binoculars Building in Venice - designed by architect Frank Gehry - formerly housed the advertising agency, TBWA\Chiat\Day, but as of 2011 Google opted for a lease to house its Los Angeles expansion. The binoculars were designed by Claes Oldenburg and Coosje van Bruggen and served as an entrance to the building and the parking garage. 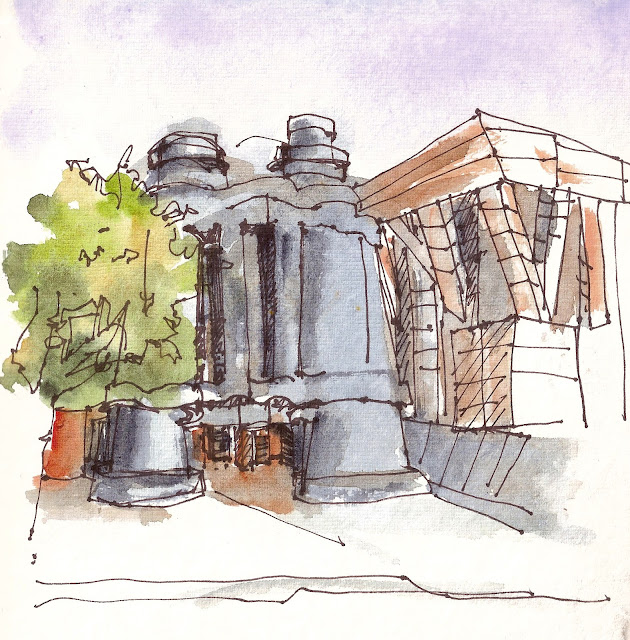 Sunset on our last day - we'll be back.