Hanging out with NYC Urban sketchers

I'm visiting my daughter in Brooklyn and had made arrangements to join the New York City sketchers. Mark Leibowitz, the organizer for NYC USk, sweetened the pot by choosing my daughter's neighborhood for the site.

We started at Pier 11 in lower Manhattan - pretty much the southern tip - where a free ferry will deposit passengers first at IKEA, then at Fairway market - about a block from where I'm staying.

A couple of quick sketches on the boat . . .


We hit Hometown BBQ for lunch... 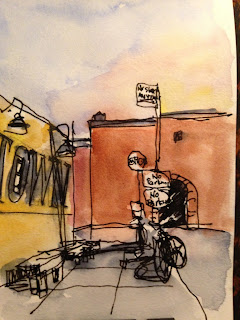 A one-time plan to build a trolley system in Red Hook to connect to downtown Brooklyn started with a string of vintage streetcars. Because there is no subway line in Red Hook this was a popular idea.  Back in the '90s Bob Diamond, the visionary for this project bought a dozen vintage trolleys that had been rescued from an old tunnel and arranged for a half-mile of track to be laid back on the streets of Red Hook.  Soon after Bloomberg became mayor of NYC, the plan was pulled from the drawing board. Hurricane Sandy caused more damage to the streetcars and they quickly deteriorated. Recently all the old streetcars were removed except this one. It remains an icon to a different era.