There but for Fortune

Note: The Choir organizer just contacted me and asked that I share this link to the upcoming documentary film by award winning visionary Susan Polis Schutz (Blue Mountain Arts).

Definitely one of the coolest things I've witnessed while I've been in Los Angeles. The Voices of our City choir from San Diego performed at the Santa Monica Public Library. The choir is literally the voice of the non-profit with the same name whose mission statement reads:


Voices of Our City Choir is committed to transforming the perception and experience of homelessness through the healing power of the arts. We are building bridges connecting diverse communities in positive ways through musical performance, advocacy, and education.

This was not a Christmas choir, but an ongoing performance group/support group for the members. What sets this choir apart from other choirs with people experiencing homelessness, is that they are also activists. They organize.They show up at city council meetings. They advocate for change. They push for justice. They have helped 20 people get into housing this past month. And they are a bonded group. 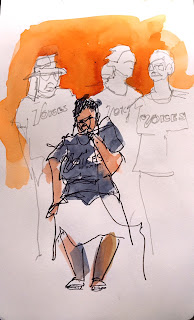 The set ranged from Stevie Wonder, to Louie Armstrong to Sister Sledge to one of their own songs. There was a mix with two guitarists, a pianist and a drummer accompanying some awesome vocalists. 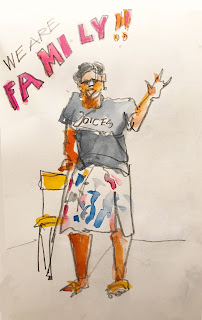 One woman who was seated most of the time had a solo. "I can't stay in my chair for this one." as she stood with her cane and let her soul come through her voice. They invited audience participation for some songs, so naturally I sang and danced along, unsuccessfully trying to blink away tears. It was all very emotional to see folks we think of as desperate, just ROCKIN'.

After the performance they had a question/answer time. They sat on the edge of the stage and shared their stories. One man, a former tech engineer who had lost everything, fell into depression and ended up sleeping on the street across from city hall in his "button-down polo shirt".

"When you get to that place, there is nothing there to help you. Nothing. No one."

Towards the end of the discussion a woman called from the audience lauding the choir for their bravery and their spirit. "I couldn't come earlier because I didn't have anyone to watch my stuff".

Another audience member self-identified as a very privileged person reported that she had done a lot of research and worked with homeless people for many years. She repeatedly affirmed them saying their voice was the most important thing they could do to help the problem of homelessness. Letting people know how you are just like them..."there but for fortune..."